ELFM and EURELCO featured in the Financial Times

Over the last few years Enhanced Landfill Mining (ELFM) has grown from a crazy idea to an emerging research and innovation domain. On January 8, 2018, the Financial Times published a Special Report on ELFM in its Series “50 Ideas to Change the World”. In this featured article Joshua Jacobs interviews several key players and discusses the barriers and opportunities for ELFM. The timing is perfect as these barriers and opportunities will also be discussed in the 4th ELFM Symposium, which will take place in Mechelen, Belgium, on February 5 and 6, 2018. Registration for this Symposium, which is organised by SIM² KU Leuven, i-Cleantech Vlaanderen and EIT RawMaterials, is still possible here: http://elfm.eu/register/

Europe’s half a million landfill sites potentially worth a fortune: Waste can now be mined for metals and to create fuel

In a village 60 miles east of Brussels, a Belgian company is fighting to launch an experiment with the future of rubbish disposal. Group Machiels, a waste management company, wants to excavate millions of tons of decades-old waste buried in one of Europe’s largest landfills and turn it into renewable energy and building materials.

“The sheer number of landfills in Europe is mind-boggling,” says Rolf Stein, chief executive of Advanced Plasma Power, which manufactures the technology that Machiels plans to use at the Remo landfill site. “Why do we need to dig deep into the depths of South Africa and South America and Australia to get crude oil when you have got [waste] materials here not far below the ground [that can be repurposed for energy]?”

People have been mining waste from landfills to recover materials or remove pollutants since at least 1953. Now, however, there is a growing body of researchers and businesses like Machiels that want to go further and do “enhanced landfill mining”. They see rubbish as an untapped resource and want to create a business model that would turn landfills into the parks and housing developments of the future.

The Remo site plans to use a technology called plasma, which heats waste to high temperatures and turns it into a renewable gas. Plasma is already used in several locations around the world to convert new waste into energy, without it needing to go to a landfill. With existing landfill sites waste can be pulled out and filtered for metals and recyclable materials. The remaining material is gasified into a fuel, and the residues from this process are converted into “plasmarok”, which can be used as a building material.

If successful, enhanced landfill mining could recycle millions of pounds’ worth of metals and generate fuel for use in cars, homes and industrial plants.

“If Remo demonstrates it could be possible, then people would start taking [the potential of landfill mining] seriously,” says Stuart Wagland, an energy lecturer at Cranfield University, researching converting buried plastics into oil and gas through thermal treatment.

Enhanced landfill mining for energy sources has been trialled in some other countries, including the US, but remains uncommon and at an early stage of development. 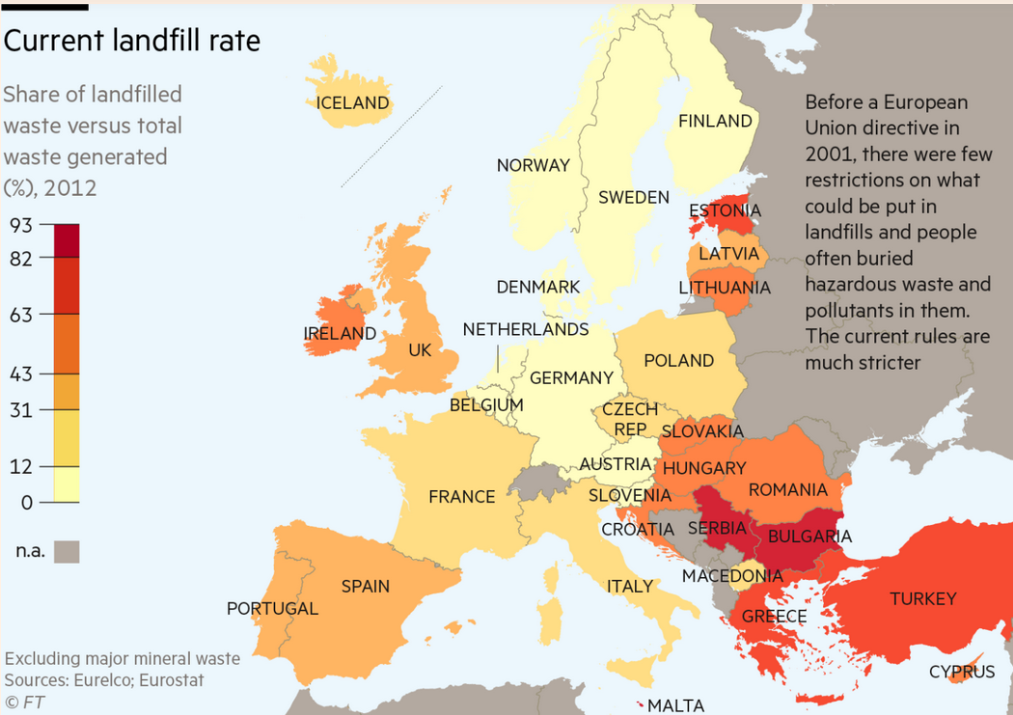 There are more than half a million landfills around Europe, according to estimates by Eurelco, a landfill mining consortium. Inside Remo, there are more than 18 million tonnes of waste. Machiels wants to recover half for building materials and half as energy, which could provide power for 200,000 homes over the next 20 years, before turning the site into a nature park.

Machiels also owns landfills in Chile and would look to mine their contents, too, if the Belgian effort is successful.

Keeping rubbish in the ground has an environmental and financial cost, says Mr Wagland. Sites have to be monitored to avoid contaminants from rubbish leaking into groundwater, and they also give off greenhouse gases, such as methane.

Mr Wagland says that he expects to see an uptake “in the next five years” in Europe of enhanced landfill mining. He looked at four sites in the UK and found they contained significant stores of industrial metals like aluminium, copper and lithium, the demand for which has increased dramatically over the past few years. “What we need is government support to be able to do a demonstration of this — and show that it can be done.”

Local communities may take some convincing about landfill mining projects. Machiels is currently involved in a legal battle at the Belgian high court, following opposition from some local residents. They hope to have an answer on whether they can go ahead by next year.

Maurice Ballard, head of the local residents’ association, says that he and most locals now support the technology in principle, but some remain fearful that the mining process will affect their quality of life and local environment.

“If all precautions are taken, I think this technology must have the chance to be installed,” he says. “Because we cannot afford any more to leave all those raw materials in landfills and import material from foreign countries — that time is over.”

He adds that it’s not just about the technology: “The arguments [of the residents that oppose this] are not based on scientific information but on emotional information. They don’t want to see landfills reopened and they are scared that they will live in an area with dust and stench and traffic.”

“Wherever we go in Europe, [including in Belgium] we are struggling to get the social licence to operate,” says Peter Tom Jones, president of Eurelco. “[At Remo] this is leading to major delays — that’s in a way very sad because the environmental credentials have been proven.”

If Remo gets approval, other businesses will be watching to see if extracting and repurposing waste can be sufficiently profitable to give investors a return.

Machiels is confident that the economics will work in the case of Remo, but each landfill site will be different, depending on their contents. Mr Wagland estimates that about 25 per cent of Europe’s landfills could be profitably mined.

“We are still at the stage where researchers are showing the benefits from a technology perspective,” says Mr Jones. “But the proof of the pudding will be in the eating: Eventually you need to convince investors to invest in landfill mining in general — this is not happening yet.”