In the period 2010-2011 Europe was confronted with the so-called “rare-earth crisis”, which was caused by the Chinese policy to limit the export of these metals from China towards the rest of the world. Because China has a quasi-monopoly to the production of rare-earths, the supply crunch and the associated dramatic price increases were felt immediately by the EU, Japanese and US economies, which found it extremely hard to obtain these much needed metals in ample quantities at acceptable prices. Rare earths, which include seemingly exotic elements like neodymium, europium and dysprosium, are crucial metals which are used in many hi-tech and clean-tech applications such as smart phones, wind turbines, electric bikes, electric cars, batteries or energy-saving lamps.

This “rare-earth crisis” has brought about the widespread realisation that the long-term availability and cost stability of many metals – not just the rare earths but also other elements such as indium and germanium – can no longer be guaranteed. The term “critical metals” is nowadays used to describe those metals which are confronted with both a high supply risk and a large economic importance.

To help solving this problem it is of great importance to develop technologies that are able to increase the levels of critical metal recycling from complex End-of-Life products such as wind turbines, electric cars, smart phones or batteries. However, recovering critical metals such as rare-earths, indium or germanium from complex waste is a very tough nut to crack. The traditional metallurgical solutions do not suffice for these kind of waste streams as they were originally not developed to deal with this modern form of waste. The EU project SOLCRIMET – which stands for “Solvometallurgy for critical metals” – will develop a ground-breaking, novel approach called “solvometallurgy” to recover critical metals from a diverse stream of waste materials.

Solvometallurgy is a new, rapidly emerging, intrinsically green branch within the broader domain of metallurgy. SOLCRIMET’s aim is to successfully apply this approach to the removal and recovery of specific critical metals, i.e. rare earths, tantalum, niobium, cobalt, indium, gallium, germanium and antimony. As these critical metals are essential components for clean-tech and high-tech applications, they are key enablers of the required transition towards a green economy in the future. Such a green economy will be both climate-friendly and circular. The former refers to the drastic reduction of greenhouse gas emissions, which cause climate change. This is possible if the energy basis for the economy becomes less reliant on fossil fuels. The latter element refers to the transition from the linear, “produce-use-dump” economy to a circular economy where End-of-Life products are remanufactured or recycled, thus avoiding the loss of materials and metals through waste incineration or landfilling in waste dumps. 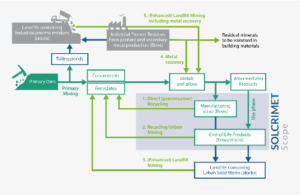 The main outcomes of the project will be lab-scale demonstrators that show the improved efficiency, utility and applicability of the new solvometallurgical processes, with respect to conventional metallurgy. SOLCRIMET’s impact on chemistry, chemical technology, metallurgy and materials engineering science will be game-changing. The possibility to recycle critical metals with energy-efficient, low-cost processes will have a significant impact on the overall recycling rates of these metals from End-of-Life waste.

This will lead to a situation where the development and production of hi-tech and clean-tech products in Europe will become less dependent on the import of expensive, critical metals from countries like China who enjoy monopolies in terms of the production of key metals such as rare-earths, indium and germanium. 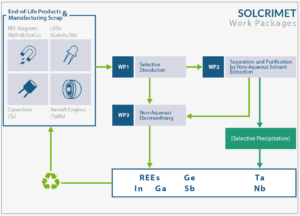