Solvometallurgy to the rescue of rare-earth elements (REEs)

Are the lamps in the first picture looking familiar to you? I bet you all have one or more fluorescent lamps in your homes, offices, gyms, cafeterias or any other buildings that you spend your time in. The technology of fluorescent lamps started in 1856 with the first experiments of Heinrich Geissler and was introduced in our everyday lives during the 1930s with the first commercial fluorescent lamp designed by George Inman along with Richard Thayer, Eugene Lemmers, and Willard A. Roberts.1

The design of fluorescent lamps was a breakthrough and they rapidly replaced the incandescent lamps, due to their superior efficiency, longer life span and low production cost.

How many of you know that a fluorescent lamp encloses high amounts of rare earth elements such as Yttrium (Y), Europium (Eu), Cerium (Ce), Lanthanum (La) and Terbium (Tb)? Rare earth elements are a group of 17 elements with very similar chemical and physical properties. Contrary to their names, most of them exist in high amounts in the Earth’s crust.

However, their dispersity and not existence in concentrated amounts is what poses the major problem. Another setback as well, is that more than 90% of their production belongs to China.2

As a result, Europe and other developed countries are struggling to find other sources of rare earth elements, which are of vital importance for green technologies such as batteries, fluorescent lamps, wind turbines, solar panels etc. Therefore, end-of-life fluorescent lamps can be considered as an alternative source of rare earth elements in Europe.

Figure 2: Position of rare earth elements in the periodic table

Figure 3: Inner part of a fluorescent lamp and the individual constituents3

But now let’s look at what the role and position of these metals in a common lamp is. As you see in Figure 3, a typical fluorescent lamp consists of the glass tube, the electrodes on both sides of the lamp, liquid mercury, the contact pins and the phosphor powder that is coated along the glass tube.

This light is transformed to visible light that human can see with the aid of the phosphor coating. Phosphors are substances that when they absorb light, transmit light! So, the white light of the lamps that helps us see, read and do many other of our daily routine activities is the result of the cooperation of electricity, mercury and phosphor powder. But what is the role of the rare earth elements? These elements are the components of the phosphor powder! There are different phosphors, as seen in the table below:

We discussed about the importance of recycling of spent fluorescent lamps in order to gain back the rare earth elements. There has been extensive ongoing research on this topic from many research groups around the world that have investigated very strong acids such as hydrochloric acid (HCl) and sulphuric acid (H­2SO4) and their research resulted in the requirement of many different steps in order to obtain selectivity of extraction. From the phosphors that are listed in the Table 1,

YOX is the most valuable one as it consists solely from rare earth elements and exists in the lamp phosphors in the highest percentage. HALO, on the other side, is a contaminant and has no value, so its dissolution and extraction is not preferable. Alternative ways of recycling of end-of-life products such as fluorescent lamps need to be developed that incorporate greener solvents and less steps of extraction.4

During my secondment at KU Leuven under the supervision of Professor Koen Binnemans and Dr Nerea Rodriguez Rodriguez, I investigated the recycling of Y and Eu from spent fluorescent lamps using a solvometallurgical approach, avoiding the use of highly acidic and corrosive solvents.

From my experimental results, it turned out that the use of choline chloride and by extension of the deep eutectic solvent is not justified, since the pure levulinic acid gave the same results. I managed to recycle almost 100% of Y and Eu from both synthetic mixture of phosphors and from a real residue of fluorescent lamps, by using mild and green solvents.

If you are interested in my results, please read my publication.

This research received funding from the European Commission's H2020 – Marie Sklodowska Curie Actions (MSCA) – Innovative Training Networks via the SOCRATES project under the grant agreement no. 721385 (Project website: http://etn-socrates.eu). Also, the authors would like to acknowledge the financial support from the Research Foundation-Flanders (FWO, Grant no. 12X5119N, postdoctoral fellowship). The authors acknowledge Relight Srl (Rho, Italy) for providing the lamp phosphor waste. 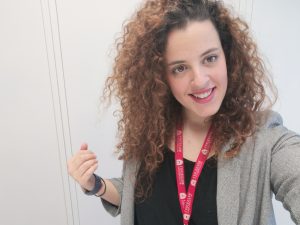 Ioanna Maria Pateli, is a licensed metallurgical engineer from Greece. She obtained her barchelor’s and Master’s degree in 2016 from the National and Technical University of Athens with distinction. In 2017, she started her PhD studies at University of Leicester under the supervision of Professor Andrew P. Abbott. Her project is the “Ionometallurgical leaching of industrial wastes using Deep Eutectic Solvents”.
2020-09-09
enews